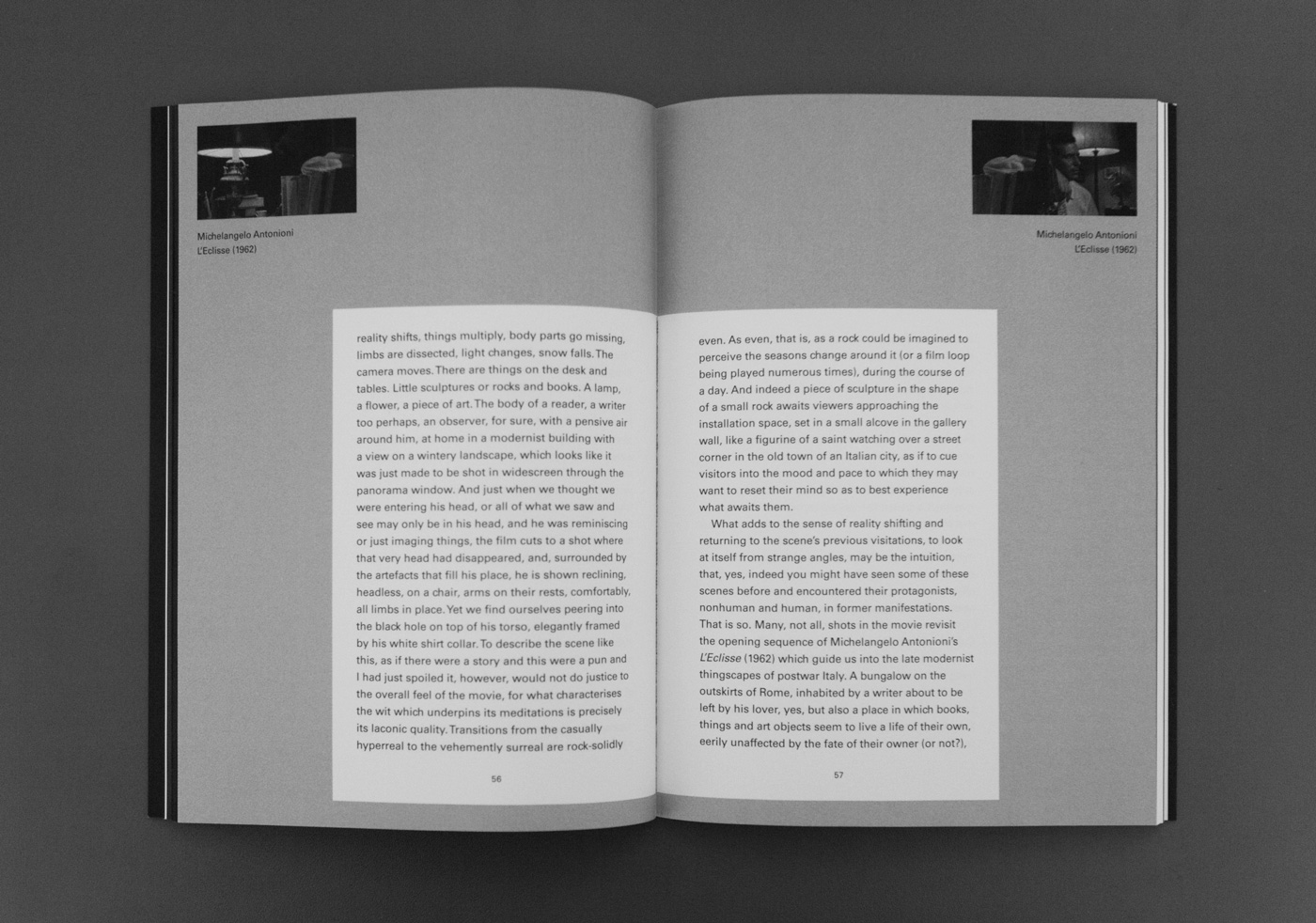 JAN VERWOERT Enter the Eerie Thingscapes
Things are never by themselves. Neither are we. They are among themselves and linger in our surroundings. And we sometimes see them, and us among them, as things among things. Yes, but not quite, not only. Because the fact of things being seen — the sheer reality of there being such thing as perception — enters the world of facticity and becomes a fact in its own right. Or so it would seem. The world is full of echoes and mirrors, of songs and words, screens, images and displays. Their material presence is undeniable. They exist among the things, and give evidence of the fact that the world is being perceived, reflected and recorded. Does a mind, heart or soul still need to intervene in the close circuit connecting the world of things and reality of its reflections? Sensing that the answer may be no, we may embark on a journey into the spheres of dark science fiction and philosophy noir, pursuing spine-tingling speculative visions of depopulated thingscapes. The imagination loves to travel into the night of reason. So let’s go. Never alone. We are guided, if not by voices, at least by a medium, with spiritual powers, yes, and material properties, indeed, the medium of cinema. The weirdest of the lot. Photography was hard enough to handle already. It inserted lens, sensitive film, mirrors and shutters in the gap between things and their echoes, and captured the shadows the world casts upon itself in permanent images. Cinema took things further, concatenating those shadows, so they would flicker and create effigies of time passing, effigies of voices resounding, effigies of atmospheres in motion, voodoo dolls of audio-visual worlds dancing around the spine of the reel as the projector beams its images into darkened space, television screens illuminate living rooms like fireplaces did, and speaker membranes materially regenerate the waves of sounds passed but caught on recording media. Eerie? Yes, positively. But never sanctimoniously so. Since in the interstitial world there is no place of sacred silence. On the contrary. As shutters click, reels whirr, images flicker, static, white and pink noise fill the ether with grainy sounds that mix muffled noises from outside. And if their headless bodies permitted things to giggle, perhaps they would. And can you be sure they don’t already? As ants scuttle over and around each other, who knows, perhaps their heaps are filled with laughter, of a particular kind: an echo of the world acknowledging the fact of its own animation.

This is how I would try to describe the atmosphere and paraphrase the thoughts Sam Smith generates in his film installation Form Variations (2014). Which is first of all to say that in this piece he practices a particular form of atmospheric thinking. He lets images, sounds and artefacts charge the space of the installation with a sense of things being perceived, things being thought and things being left to linger among themselves. Atmospheres don’t permit themselves to be transcribed into arguments. Still, they are articulated. Atmospheres imply articulation like silent prayers do which fill spaces with a most distinct sense that particular forces or spirits are being convoked in a highly specific manner (for those presences would not materialise, were they not summoned in a manner appropriate to their peculiarities and properties). In this key of alertness to even the smallest detail of an invocational rite, Sam Smith choreographs the way in which the parts of this work enter into relations with each other. The video loop at the heart of the installation is housed within a purpose-built piece of exhibition architecture, a darkened space with a window box inserted into its side wall. The box through which you may peer into and out of the space of the projection has the exact measure of the 1.375:1 Academy image ratio, introduced in 1932 as a standard for 35mm film production. In the box, two sculptural objects are set, a small sphere placed on a slender concrete slab, which exude an air of ominous quiet akin to that found in paintings by Giorgio Morandi. Inviting you to sit and watch the movie, a bench awaits you inside, wood top on an elegant steel frame, not unlike a modernist coffee table, yet this one is built according to the measures of today’s standard widescreen format. These details play their part in summoning the spirit of the cinematic in its changing historical manifestations. A sense of physical presence, however, is part and parcel of this ceremony. Cued into a sense for the silence of things by the objects in the viewer box, you may find your head and torso mirror the sphere and slab as you sit on the table bench as you permit yourself to become motionless and quiet in the course of becoming absorbed in the uncanny stillness of imagery of the movie:

A sense of the eerie prevails in the video, a sense of time running in circles, not, however, to reconfirm that what once was will be what it still is when the moment of its appearance comes around again, no, with each return to the scene of a previous recording, reality shifts, things multiply, body parts go missing, dissected limbs, light changes, snow falls. The camera moves. There are things on the desk and tables. Little sculptures or rocks and books. A lamp, a flower, a piece of art. The body of a reader, a writer too perhaps, an observer, for sure, with a pensive air around him, at home in a modernist building with a view on a wintery landscape, which looks like it was just made to be shot in widescreen through the panorama window. And just when we thought we were entering his head, or all of what we saw and see may only be in his head, and he was reminiscing or just imaging things, the film cuts to a shot where that very head had disappeared, and, surrounded by the artefacts that fill his place, he is shown reclining, headless, on a chair, arms on their rests, comfortably, all limbs in place. Yet we find ourselves peering into the black hole on top of his torso, elegantly framed by his white shirt collar. To describe the scene like this, as if there were a story and this were a pun and I had just spoiled it, however, would not do justice to the overall feel of the movie. For what characterises the wit which underpins its meditations is precisely its laconic quality. Transitions from the casually hyperreal to the vehemently surreal are rock-solidly even. As even, that is, as a rock could be imagined to perceive the seasons change around it (or a film loop being played numerous times), during the course of a day. And indeed a piece of sculpture in the shape of a small rock awaits viewers approaching the installation space, set in a small alcove in the gallery wall, like a figurine of a saint watching over a street corner in the old town of an Italian city, as if to cue visitors into the mood and pace to which they may want to reset their mind so as to best experience what awaits them.

What adds to the sense of reality shifting and returning to the scene’s previous visitations, to look at itself from strange angles, may be the intuition, that, yes, indeed you might have seen some of these scenes before and encountered their protagonists, nonhuman and human, in former manifestations. That is so. Many, not all, shots in the movie revisit the opening sequence of Michelangelo Antonioni’s L’Eclisse (1962) which guide us into the late modernist thingscapes of postwar Italy. A bungalow on the outskirts of Rome, inhabited by a writer about to be left by his lover, yes, but also a place in which books, things and art objects seem to live a life of their own, eerily unaffected by the fate of their owner (or not?), as if Morandi had painted a film set in three dimensions. The revisitation of this scene in Form Variations, however, is much more than merely a reference. This is because Sam Smith does not simply point to the historical examples. He actualises their atmosphere in a poignant manner. In doing so he foregrounds aspects and undercurrents which compose the background of Antonioni’s film. Most fascinatingly indeed, the latter offsets the plot of a casual romantic relation (emerging from and going nowhere) between the two protagonists, Alain Delon and Monica Vitti, by a series of close-ups on the material world that surrounds them. Most of the details in their world of interior decorations, new apartments and suburbs speak of postwar modernist affluence, yet not only, because via proximity of the camera to the things Antonioni taps into a peculiar form of animism. Especially when he films the small Cubist table sculptures and decorative objects in the movie’s opening sequence you sense that these things still partake in a dimension of experience — a lore of object magic — which is older than the reality of modernisation imposed on their surroundings. Surprisingly it is precisely the moments when the camera closes in on Vitti offhandedly letting her fingers run across the surface of one of these little things that you sense, right from the start of the film, that the bourgeois universe of career aspirations channelled through stories of romantic entanglement will never exhaust the full horizon of experience. An exit remains: the quiet touch that puts you in contact with the silent presence of things, a touch of the fingertips, yet also the touch of light on celluloid through the lens of the camera. Sam Smith takes the hint and exits through this very door, left ajar by Antonioni: out from the world of plots and schemes, into the dimension of close encounters with the materiality of objects and cinematic images, as they enter into a peculiar interplay with each other, letting thingness imprint itself on the image and calling fourth the soul of things via the conjurational powers of the camera. All of this is intense and eerie, yet never without a particular touch of truly subliminal humour which Sam Smith adds to those moments when the deeply unsettling turns into the profanely surreal, that is, when for a second, you can no longer be sure whether all these things are only in your head, or your head has taken off on a trip to enter a level of the real where it can sit and linger, at ease, among the vase, books and sculptures on that table right there.